“The future of conservatism is up for grabs. There is a desperate need for intellectually rigorous and practically effective conservative leadership in the urgent policy fights we face—from gender identity and Critical Race Theory to family economic policy and Big Tech’s woke thought police. EPPC is uniquely positioned to provide that leadership, ensuring that Judeo-Christian orthodoxy and natural law rationality definitively shape conservative policy proposals moving forward.” 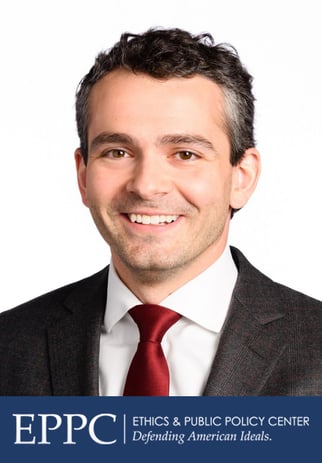 Q: Given the state of the country today, why is EPPC so vital to the future of America?

As we advance our mission, EPPC is filling a crucial need. The conservative movement is rich in amazing policy shops that focus on limited government and wonderful litigation firms defending religious liberty and conscience protections—and we need them desperately. But conservatives also need to make the substantive case for the truth on a variety of core issues currently under attack from the Left and to develop corresponding policy positions. Simply creating room for good people to agree to disagree is a vanishing prospect in cancel culture—we need to speak the truth, going on offense in politics and culture, in anthropology debates that underlie our religious liberty battles, on life, healthcare, marriage, and gender identity. EPPC is doing just that: articulating the truth of the matter on a host of pressing questions facing our society and then translating those truths into practical policy solutions.

Since 1976, EPPC has worked to ensure that the riches of the Judeo-Christian tradition are brought to bear on contemporary questions of law, culture, and politics, in pursuit of America’s continued civic and cultural renewal. Learn more at eppc.org.

Q: Where do you see future opportunities to leverage EPPC’s strengths?

For 45 years, the Ethics and Public Policy Center has been at the center of the national debate over religious conviction in the public square and the moral and ethical norms that should inform our laws. I’m honored to now lead EPPC in continuing that work. Many Impact Fund community members will be familiar with our past presidents George Weigel and Ed Whelan. Both now serve as EPPC Distinguished Senior Fellows. George—the biographer of John Paul II—is the world’s leading expert on all things Catholic, and Ed—a former clerk to Justice Antonin Scalia—is a preeminent Supreme Court commentator who helped get so many judges and justices confirmed during the Trump administration. We’re also now actively engaged in healthcare and Big Tech. The former head of civil rights at HHS during the Trump years, Roger Severino, and Attorney General Bill Barr’s Big Tech assistant, Clare Morell, have come to EPPC to work on those issues.

We leverage our strengths precisely by playing to them. EPPC is the premier conservative institution driven by a Judeo-Christian worldview articulating a cohesive public policy infused by that worldview. Our scholars work tirelessly to promote public policies that are faithful to American values, and our projects encompass the broad array of challenges that our nation faces. In the coming years, we will focus on pushing back against the extreme progressive agenda while building a 2024 consensus for conservatives, and helping faith communities build their political witness while living the faith out in their homes and in the public square.

Q: What is exciting for you personally in your new role?

Helping an existing organization grow and adapt to the new circumstances of twenty-first century America. When EPPC was founded in 1976, the Reagan Revolution was just on the horizon. Today, there are new challenges that Reagan could never have imagined. How do we apply timeless principles to these changing circumstances? That’s an interesting intellectual question, but also an urgently practical one. I’m excited about tackling both aspects.

I spent the past decade as a senior research fellow at The Heritage Foundation, and the decade before that as an assistant editor for First Things back when Fr. Richard John Neuhaus was still with us, a research assistant to Robby George, a PhD student at Notre Dame, and an undergrad at Princeton. I’ve written four books—one of which was so good Amazon refuses to sell it anymore! So the past twenty years or so of my life has been spent doing my own intellectual work. With this new role I get to mentor younger scholars, guide a team to focus on the most important issues facing our nation, and lead an existing institution into the future. For Americans who care about the future of human freedom and human flourishing, and the moral truths that undergird and sustain our nation, I’m excited about ensuring that EPPC is their voice in D.C.

Q:What is your message to donors as they consider EPPC?

EPPC is rapidly expanding our programs to lead the conservative movement in urgent policy battles that are being under-addressed. We need to gear up for battles such as Big Tech’s silencing of conservative voices and speech; the Woke thought police’s imposition of Critical Race Theory on schools and business practices around the country; the gender ideology’s militant narratives and public policies that fast-track vulnerable children towards life-changing medical and surgical gender transitions.

The conservative movement and its institutions are in a period of uncertainty—and opportunity. EPPC houses some of the conservative movement’s best thinkers and is producing its best policy ideas. I’m tremendously grateful for the way Bradley Impact Fund donors are working to create a better world for our children and grandchildren, and I hope they’ll consider joining EPPC’s incredible community of supporters to continue that work in the urgent policy battles we face today.