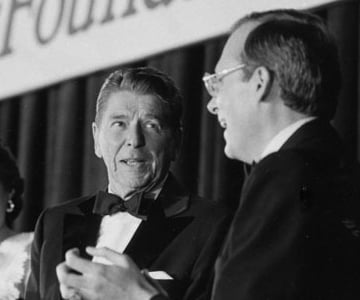 On January 21, 1981, Ronald Reagan held his first cabinet meeting. At that meeting he handed each cabinet secretary a copy of Mandate for Leadership, a 3,000-page tome filled with over 2,000 conservative ideas and policy recommendations.

The book was the idea of Heritage board member Robert Krieble, a chemist by trade who, based on a hunch that Jimmy Carter would be a one-term president, suggested it would be a good idea to have a playbook for an incoming administration. Mandate for Leadership became the plan of action for the entirety of the Reagan administration. The New York Times called it “the manifesto of the Reagan Revolution.” By the end of Reagan’s first year, over eighty percent of the policy suggestions had been implemented.

Eight years after that first cabinet meeting, a small group of scholars met at a convent in Madison, Wisconsin, to start another kind of revolution. Kimberlé Crenshaw, Neil Gotanda, and Stephanie Phillips organized a workshop entitled “New Developments in Critical Race Theory.” With roots in 1970s-era Critical Legal Studies, the CRT movement would soon gain steam in universities—first in education schools and later in law schools. It would later gain financial backing from progressive billionaires, who invested in converting the theory into the radical ideas now employed in school districts and corporate boardrooms nationwide.

As conservative scholar Richard Weaver famously pointed out, ideas have consequences. But this is only true if the ideas gain supporters. Mandate for Leadership was made possible by funding from Krieble and others who supported the Heritage Foundation in the early years. Another early backer of the “think tank” that would market policy ideas directly to staffers in Washington, DC, was Joe Coors.

In Funding Fathers, Nicole Hoplin and Ron Robinson argued that such donors were the conservative venture capitalists of their day, investing in ideas and people that would become the foundation for conservative movements through the decades. It’s a great read for those of us who love stories of men and women who had the vision to fund visionaries—often with relatively little capital. The venerable Mont Pelerin Society, for example, was started in 1945 when a picture frame manufacturer named William Volker gave Friedrich Hayek $2,000 to be used for “educational purposes.” 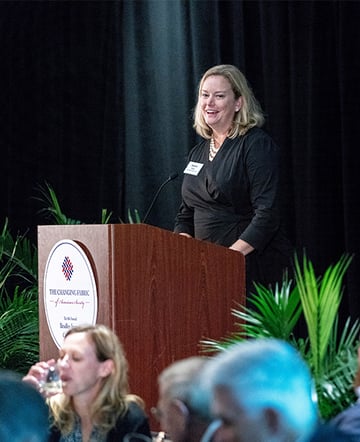 There are still great people with great ideas among us. Unfortunately, those with ideas antithetical to freedom are also among us, oftentimes backed by tech billionaires and universities. The bright side to this is that liberty is less expensive than its alternatives, as we see time and time again with elections, where conservatives are routinely outspent, yet often find a way to victory.

The trick is finding and funding the best ideas, which is where the Bradley Impact Fund can help. Who is writing the next Mandate for Leadership? Which groups are taking on issues in education—from promoting education options to protecting intellectual diversity on college campuses—and winning? What startups are reaching younger generations and making conservative ideas relevant to them? How can I move the needle? And as we enter election season, who is coming up with the best ideas and policies for them?

We’d love to introduce you to the people and organizations that are on the cutting edge of conservative ideas and policy. If you’re already working with us, ask us to make suggestions. Attend an Impact Fund event in California or Lake Geneva or Arizona to learn more about who is doing great work. Or be our guest at a meeting of an organization we support in your area: we’ll be attending events in Texas, Florida, Arizona, California, Georgia, Montana, Idaho, Washington (DC and State), and Oregon between now and the end of the year. We’d love to meet you in person and help connect you with others who are backing the people and ideas that are laying the groundwork for the future of freedom—it’s one of the best parts of our work. We look forward to hearing from you.