The following speech was given by 2022 Bradley Prize winner Wilfred M. McClay at the 18th Annual Bradley Prize Ceremony in Washington, DC, on May 17, 2022. 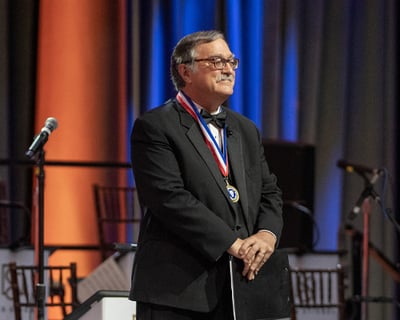 It is a great joy and privilege for me to be here with all of you this evening. It is an immense honor simply to appear on the same stage with these two men, my fellow prize-winners, both of whom are heroes to me, and heroes of a very high order. And then, to find myself lifted into the company of Bradley Prize recipients in years past, a cloud of witnesses who testify to this country’s role as a home for excellence, and to The Bradley Foundation’s tireless support for that ideal. In a time when the luster of so many oncevaunted honors has faded, this one is only gaining in strength. May it ever be so.

I’m going to build my brief remarks tonight around a story. They say that anecdotes are not data; but so
much the worse for data. Stories are what make the world go round. They are the means by which we orient ourselves to the world, and to one another. There are stories of which we are already a part, and that are a part of us, stories that have already formed the basis of our common life even before we lisp our first words. Stories drawn from the Bible, from children’s books, from great literature and movies, from history, or from humbler sources, such as the shared yarns of extended families or the patois of long-standing friendships and intimate relations.

So, here’s my humble little story for tonight.

At some point during the past few years, I was fortunate enough to have dinner with a very wise friend, here in Washington, at his favorite seafood restaurant near Dupont Circle. I noted that he seemed to be spending more and more of his time in a certain foreign country. He acknowledged the fact, paused for a moment, and then added the following words: “I want to live in a serious country.” It may be relevant to point out that the foreign country in question is Israel, where seriousness is an existential requirement. But it is equally important to point out that the gentleman in question is an American patriot of the highest order, the author of books on the subject. For him to say such a thing was, for me, a very serious matter.

So . . . have we become an unserious country? I dismissed the idea at first. Millions of good, responsible, ordinary Americans go about their business, raising their families, paying their bills, participating in the life of their communities, building their futures. They don’t have time for the insanities that are polarizing our culture.

But then I thought again and considered the evidence.

Would a serious country have run up a national debt of now almost $30.5 trillion during times of relative peace and prosperity?

Would a serious country have spent that borrowed money feathering its nest with cheap consumer goods and the other markers of material prosperity, produced by a ruthless foreign power employing what amounts to slave labor?

Would the leadership class of a serious country become so deeply preoccupied with its internal political wranglings that it fails to see that the rest of the world is watching and taking note—and that the country’s enemies in the world are even now calculating the possibilities that its feckless leaders have opened up for them?

Would a serious country actively seek to demoralize its police forces? Would it promulgate arbitrary and contradictory policies regarding public health, causing angry divisions in the land and distrust of authority that may take years to heal, if ever?

Would a serious country allow a twenty-year investment in Afghanistan to go up in smoke, and abandon the Afghans who had trusted in its protection, along with a major air base and $90 billion of weaponry—an amount larger than the annual military budget of all but two countries in the world?

Would a serious country allow the apparatus by which it elects its leaders to become so corrupted and to fall into such disrepair that its citizenry of both major parties no longer trust the outcomes of our elections?

And here is the question that most concerns me. Would a serious country so completely lose perspective on its own past that it would seriously entertain the idea that the nation was founded in and on slavery, rather than on the ideals that have made it a beacon to the rest of the world? And would a serious country think it appropriate to teach its children that the nation’s past is best understood as a parade of horrors, to which the most appropriate response is not pride but lacerating shame?

Land of Hope represented my small attempt to provide an adequate response to these questions about our past. In the three years since the book was published, I’ve learned how many of us have wanted and needed just such a book. Nobody wants an account of the American past that is sanitized. We know well our faults, and the importance of owning them. But we also want and need an account that places our faults in proper perspective—in much the same way that we understand every flawed but fundamentally admirable person we have ever known and loved in our personal lives. That is the nature of love, not to demand perfection, but to see imperfection in the light of something larger. And the unwillingness to love is the greatest unseriousness of all.

We need to become a serious country again. And to do that, we need to believe in ourselves again, believe in the reason we have been placed here, as a land of hope for a world that needs us more than ever. We need to understand that a world without America will be immeasurably diminished, both in material and spiritual terms, and that we have no choice but to live up to the responsibilities that come with our many blessings. Our history can, I believe, be an enormous resource in that endeavor.

The work will not be easy. But it will be much harder to live with ourselves, and with the rebuke of the future, should we shrink from the challenge. And once we understand what is at stake, we may feel a certain exhilaration that comes of knowing what our circumstances and character demand of us.

Let me close with a quotation, the one with which I began Land of Hope. It is a reflection on the uses of the past by the novelist John Dos Passos, written in 1941:

In times of change and danger when there is a quicksand of fear under men’s reasoning, a sense of continuity with generations gone before can stretch like a lifeline across the scary present and get us past that idiot delusion of the exceptional Now that blocks good thinking.

Yes, we too live in a time of danger. But consider this. When Dos Passos wrote these words in early 1941, Adolf Hitler’s formidable war machine controlled all of continental Europe, and only the British Isles held out—though who knew for how long? Dos Passos could have been forgiven for thinking that this terrifying moment was without historical precedent. Instead, he invoked the past, and the idea of a historical consciousness that could “stretch like a lifeline across the scary present,” and help us to know that we remain connected to those who came before us.

To do that, we first have to learn, or relearn, our story. In so doing, we will discover that we also are learning about ourselves, and about all the things of which ordinary people are capable—even us— when we are allowed to breathe the air of freedom and hope.