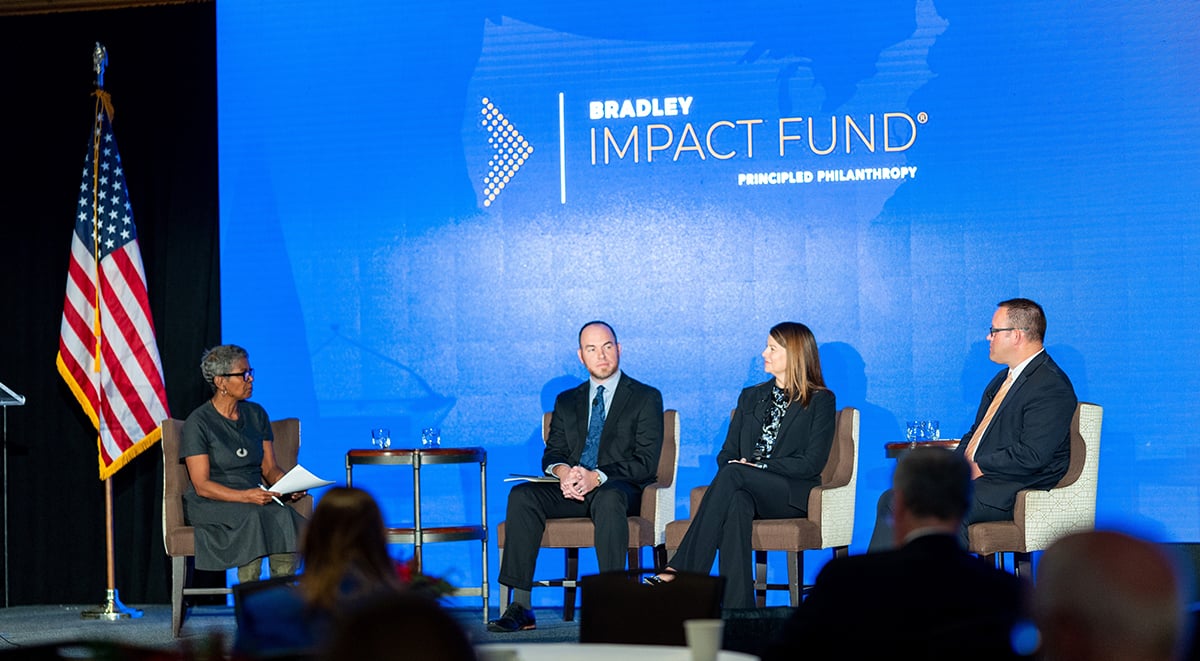 In Solutions for Civic Engagement, Impact Fund Senior Philanthropic Advisor Sherry Street moderated a lively dialogue between grant recipients engaging different citizen groups in civic life. Jonathan Bechtle, COO and General Counsel for The Foundation for Government Accountability, highlighted election reform, saying, “The hidden story in Florida is that they tackled the problem of local election leadership. You can have the best laws in the country, but if the leaders aren’t going to carry them out at the local election level then you get bad outcomes. In Florida, there were two in particular...that had patterns of sloppiness, not following the law, negligence that just really wrecked confidence in the election system. Ron DeSantis had them voluntarily resign from their jobs and put new people in those jobs.”

Stacy Blakeley, Executive Director of The Policy Circle, noted, “We believe civic engagement, civic life is much broader. We all tend to look at those fundamental civic duties, voting, serving on a jury, but we can look much bigger. Civic life is participating in the Rotary Club, it’s being part of your neighborhood association. There are so many positive ways you can step up and contribute...It’s really about bringing back the power of association to rebuild trust in institutions because you’re there.”

A common value across these grant recipients is that everyone in America has a voice. Lance Christensen, Executive Vice President for the California Policy Center (CPC), talked about ways CPC is uniting and elevating voices when he noted, “We’ve realized there’s a different model conservatives on the center right need to engage in, a hub and spokes approach. We need to think about branching out and collaborating with others who share our values and want to advance the vision.”

What Works — How to Transform Former Prisoners Into Contributing Citizens

In this breakout session, Marty Calderon, Executive Director of God Touch Milwaukee, spoke about the impact of his organization’s residential program for men who are struggling with addictions or recently released from prison, saying, “We’re helping transform men’s lives within the home and they’re helping transform neighborhoods outside the home. So where once they were terrorizing neighborhoods now they’re going back into neighborhoods and making them safe.” James Schatzman, Executive Director of Racine Vocational Ministry, an organization helping former inmates re-engage in the community, noted that forming relationships with family members, on the job, with God, and in their community is the difference-maker in former inmates’ ability to create healthy lives and pursue the opportunities available to all Americans.